Home » Blog » California’s Collateral Rule: Getting Compensation for Medical Bills Can Be a Complicated Process

California’s Collateral Rule: Getting Compensation for Medical Bills Can Be a Complicated Process 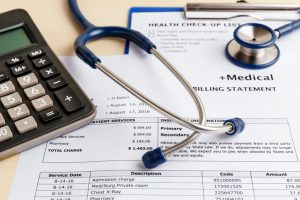 One of the most common questions a client has after their personal injury case has been resolved is whether or not their medical bills are included. Yes – they always are. However, it’s not quite that simple. Read on to learn more about collecting on your medical bills. Then reach out to Law Offices of Michael A. Kahn at (310) 209-1600 if you have additional questions or to schedule a free legal consultation.

You’ll usually be dealing with a one-time payment

In most cases, if you settle a personal injury case with an insurance company, you’ll get a lump, one-time payment. There are exceptions, mainly if you get a structured settlement over several years. This is generally only the case in catastrophic injury cases or a case that involves a minor. When you’re injured by a negligent party, you’re entitled to damages for your lost wages, pain and suffering, current medical bills, and future medical bills. However, it can get complicated if your medical bills have already been paid by insurance or a state service like MediCal.

The Collateral Source Rule as it applies to medical bills

California law allows for injured parties to recover reasonable value for their medical supplies, treatments, and services. The Collateral Source Rule goes further and says that when a person is injured as the result of someone else’s negligence, they’re entitled to medical costs even if those medical costs were paid by insurance.

In the event of a wrongful death case, insurance companies or other defendants aren’t allowed to introduce evidence that the widow or widower has received benefits, such as a the pension of their deceased spouse. The purpose of this Collateral Source Rule is to ensure that a person isn’t penalized for having insurance. That said, there are limits to this rule.

Limits to the Collateral Source Rule

In theory, this is a reasonable limit. However, insurance companies have tried to use it to get what they want by working with hospitals to pay less for medical care than they should have, which then reduces the payout to the plaintiff. If you’re in that situation, or worried that you might be, there is help out there for you.

Any personal injury case, no matter how big or small, is worth talking to an attorney about. At Law Offices of Michael A. Kahn, we will give you a free legal consultation to start. Reach out to us at (310) 209-1600 to learn more about your specific options.